I've lived in Argentina for going on 18 years now and at first much of what I saw made my eyes pop out of my head, especially since I started riding about 15 years ago. I wouldn't say I agree with everything I see, but it has become kind of normal, like so many riders without helmets or simply perching it on their heads which seems kind of pointless.
Or a family of four on a 150cc or less, with luggage and shopping, but they do at least squeeze the kids between Mum and Dad and give them a helmet each, if available.

It's amazing what you can cram onto a bike. 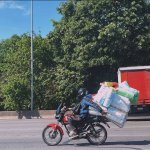 Taking the dogs for a walk

Cartoneros are people that scour the streets and bins for materials they can sell or recycle. They appeared after the $95billion crash in 2001.

A taste of Albuquerque

Cram onto a bike? I'm sure than in India there would be the entire family and a couple of baskets of chickens as well

Jester said:
Cram onto a bike? I'm sure than in India there would be the entire family and a couple of baskets of chickens as well
Click to expand...

No doubt about that at all

How about this one? when he stops, which foot does he put down?